‘I still recall the first conversation with our next door neighbour Cissie, at No 8. As she was stone deaf the dialogue was pretty one way, but when you reach the age of 95 some decline in faculties is inevitable. She told us that she had moved into the house on her marriage, sometime before the last war, and that she and her husband had run a tailor’s shop on Western Road.

'Although now widowed, we were pleased to see that she was still able to get out, courtesy of the car that picked her up early
most evenings. Sadly, a year or so later she did have to move on to the local Jewish old people’s home, but we were somehow pleased when a couple of days after her departure the driver knocked on our door to check that the old lady next door no longer required her lift to the Casino in Preston Street. We had clearly come to a street with both history and character . . .'

Aiden Lunn, Number 7
Thanks to CMPCA
Posted by Gaythorne Silvester at 00:47 No comments: 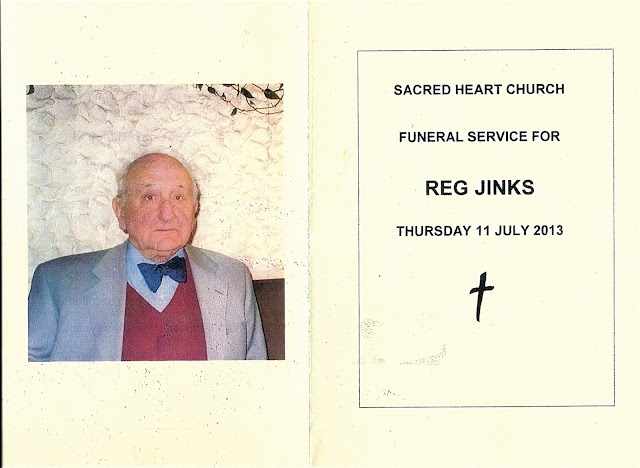 Reg Jinks' funeral service was held at the Sacred Heart Church in Norton Street on Thursday 11 July. The day was gloriously sunny and warm and the church was packed with family and friends.

In the eulogy, Father Roger Kirinich, a member of Reg's family, reminded us just how special he was – a kind, cultivated and very civilised man of great integrity.

Reg was also, said his great friend Trevor Messenger, a free spirit. Trevor read a poem by Seamus Heaney which he had chosen especially for the day, A Kite for Aibhín 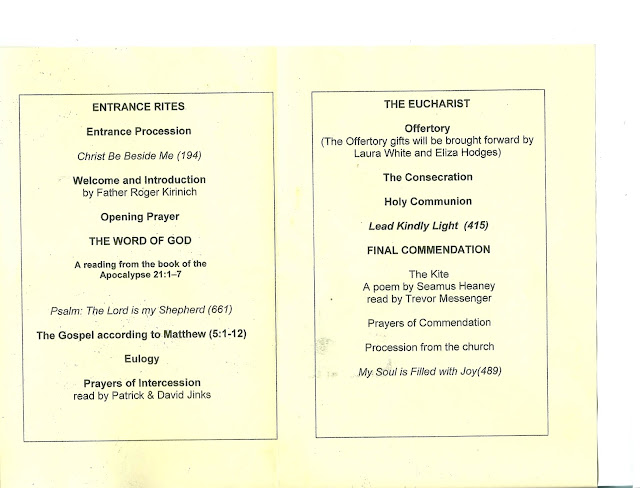 See Franny Skeeles' Tribute to Reg. If you'd like to add your memories of Reg, please write in the comments section below.
Posted by Gaythorne Silvester at 14:10 No comments:

Very sad news. Reg Jinks, who lived at Number 3 Temple Street, has died. Reg had been born on 26th April 1926, and lived in Temple Street since 1961, and will be greatly missed by his neighbours. Here is the notice from the Brighton Argus, dated 2nd July 2013.

JINKS Reg. Died peacefully at home, 3 Temple Street, Brighton, on 24th June 2013. Formerly a lecturer at City College and involved in education all his life. Cherished husband to the late Maud, father to Veronica and Anthony, grandfather to David, Laura and Patrick. He will be sadly missed by family and friends. Funeral shall take place on Thursday, 11th July at Sacred Heart Church, Norton Road, Hove at 12.00 noon followed by family only for committal. Donations made payable to CAFD, with all enquiries c/o Co-operative Funeralcare, 133 London Road, Brighton, BN1 4JH. Tel: 01273 607276.
Fran Skeeles, one of Reg's many good friends, writes:

I had the good fortune to become a next door neighbour of Maud and Reg back in 1993 when my family moved into 4, Temple Street.

We were busy decorating the front room prior to moving in, and they popped their heads through the window to say "Hello", and that was the beginning of a lovely friendship.

We shared similar values and interests...a love of family, friends, literature, theatre, art, travel, new adventures in all sorts of shapes and forms, and also the odd glass of wine!!!!!! Sorry, Reg, that`s not true, we enjoyed, on many occasions a jolly good p*ss up for any reason we could conjure up ...happiness, sadness, simply enjoying each others company!!!

Reg adored his family, and we used to compare notes on our growing grandchildren ...his love and interest in his family really sustained him in the years after Maud's death, as did his great friendship with his old friend Trevor, who my heart goes out to at this time. Reg has been such a very good friend to me, and despite his ongoing trouble with his walking, in recent years, very rarely complained, and was always more concerned with offering help to me if I needed it.

Theatre was his life. Both he and Maud were actors and then Reg moved into directing. He was HUGELY involved in the New Venture Theatre, just over the road in Bedford Place ...and lost his hearing when a stage explosion there went horribly wrong and went off in his ear, during a rehearsal. That happened many years ago now.

Recently I`'ve been seriously ill and in hospital a great deal, and Reg was constantly phoning me to chat and see if there was anything he could do to help. He too had had a heart bypass several years ago, which gave him a new lease of life, and enabled him to go flying round Brighton again on his beloved bike!! I`'m so glad that I popped in on Reg on the Friday before he died, and we had the chance to catch up and have a cup of coffee together. I shall miss our lunches at La Florentina, our catch ups over coffee and chocolate biscuits, and of course the odd shared natter over a bottle of wine!!!

I've been blessed to have had such a lovely man as my friend, and will miss him greatly. My thoughts and prayers go out to Veronica, Chris, Anthony and all his family and friends. I`'d also like to mention Pete and Laura from no. 2 who looked after him so well since they moved in next door. The Hare Krishna Community at no.1 also took him to their hearts and he was much loved by Dina, Jahnava, Sylvan and the other folk who live there.

Reg was a true gentleman, the likes of whom are hard to come by these days. Bless you Reg ...I`'m sure all your friends will be raising a glass to you on Thursday and remembering you with great love and affection.

Much Love my dear friend. Hare Krishna and HUGE HUGS!!

Posted by Gaythorne Silvester at 14:58 2 comments: